The Energy of Beamed Photons

The Doppler Effect and Beaming combined.

In the following section we shall go through the logic of his derivation.

In the animation there are two photons. Both travel perpendicular to the direction of travel of the spacecraft. They also travel in opposite directions. Ultimately only consider the two photons. The wave depiction is used to help illustrate the magnitude of the Doppler Effect on the photons. 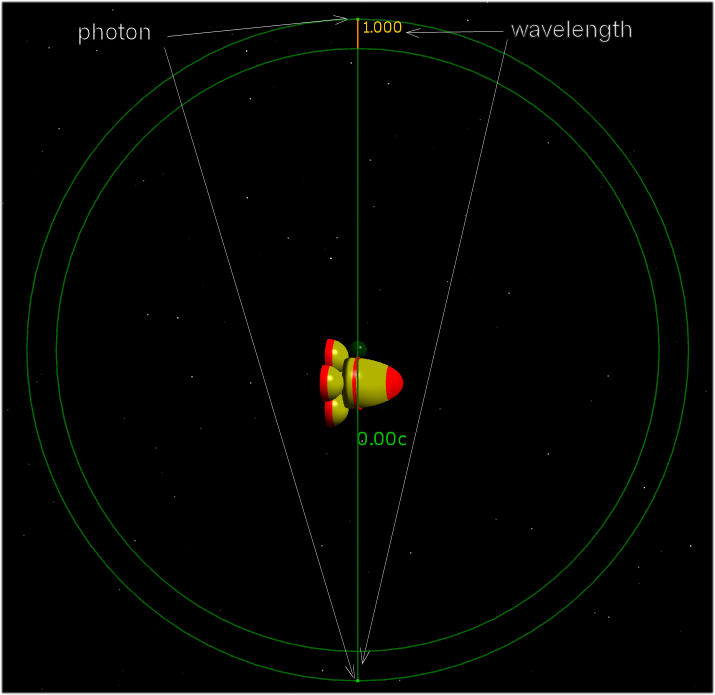 This always results in a value of 1 for zero spacecraft velocity irrespective of wavelength.

The main observations to make from the animation are

If you are patient enough to plot all the wavelengths for all the spacecraft velocities you will notice it follows the same path as that for the time dilation plot. Now this only applies for the two photons depicted in this animation. If the photons were to follow any other path the plot would be different.

A more general statement can be made about the total energy carried away by the photons. As long as the photons are emitted 180o apart the total energy emitted by the two photons will follow the same plot as illustrated in the animation. For example in the animation the photons are emitted at 90o(above) and 270o (below) to the direction of travel. However if we chose 45o and 125o, once again 180o difference, the total energy of the photons for all the different velocities of the spacecraft still follow the same energy plot. The energy plot is not dependent on the angle of emission as long as there is 180o difference and the combined energy of the two photons is plotted. In that way we have got rid of any dependence on angle of emission. We are free to concentrate just on the dependence of the photon energy on the velocity of the spacecraft.